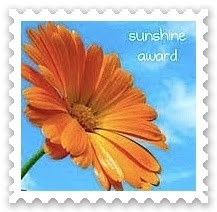 And since this is the sunshine award, I'm going to mention 7 great "sunshine songs"…

2. You Are The Sunshine Of My life… Stevie Wonder

3. Don't Blame It On The Sunshine… Michael Jackson

4. I've Got Sunshine, On A Cloudy Day… The Temptations

5. Don't Let The Sun Go Down On Me… George Michael/Elton John

Did I leave out any "sunshine songs"? Please feel free to add them in the comments…

I like how Tangent Shell provided 7 links to sites dealing with helpful writing advice. So I'm going to use this idea in my own way. I'm going to list 7 "writerly gems" that keep me going… inspire me…

1. BICHOK – the first piece of advice I was given, it's the most important… most basic… most logical… supersedes everything else…

2. Read outside your preferred genre!

3. DO NOT compare yourself to other writers! Your writing journey is unique.

4. Write what you know – a good starting point HOWEVER don't be afraid to think-out-of-the-box…

5. Writer's block is often a state of mind…

6. Everything you write is valuable, whether the stuff makes it into your WIP or not…

7. Writing is an exciting journey… the destination is simply a bonus!

If you have any to share, please add your favourite "writerly inspirational gem" in the comments below…

THANK YOU LADIES! YOU ROCK!

(Over the past 2 months, I received 3 other blog awards. Since I didn't want this post to turn into a full-length novel,  I'll post those next week…)

SINCE SO MANY BLOGGERS HAVE ALREADY RECEIVED THESE AWARDS, OVER AND OVER AGAIN,  I"M GOING TO BREAK/BEND THE RULES SLIGHTLY. IF YOU HAVEN"T RECEIVED EITHER OF THE ABOVE AWARDS, THEN FEEL FREE TO CLAIM THE AWARD AND SHARE SOME STUFF BY POSTING ON YOUR BLOG… IT CAN BE RANDOM STUFF, PERSONAL STUFF, WRITERLY STUFF… IT'S UP TO YOU… 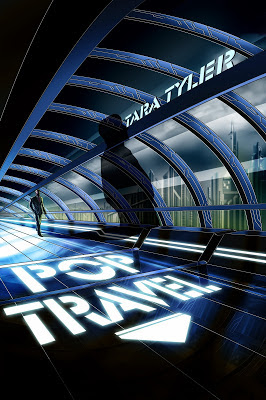 When does she have time to write?

Good question, but the Lazy Housewife makes time! Tara Tyler writes sci fi, thriller, and fantasy, with dabs of romance and humor and tips for efficient living. Something for everyone.

Pop Travel is sci fi noir, a cat and mouse game where the hard-boiled detective is chased across the world, “popping” with teleportation, which has a deadly flaw he is determined to expose.

Private Investigator J. L. Cooper always knew pop travel laser teleportation was too good to be true. Finding video proof of a disintegrating traveler is the stomach turning “I told you so.”

Cooper can’t broadcast the video on the nosy, government monitored Qnet, so he digs around, revealing more suspicious traveler disappearances, the death of his client, and threats to his political little brother, who is in jeopardy of turning to dust anyway for disregarding Cooper’s warnings not to pop. Cooper has to do everything himself.

To stop the disappearances and save his brother he must shut down the ruthless mega corp Pop Travel International (PTI). And that means convincing HasanRakhi, the celebrity Creator of pop travel, to publicly admit the deadly flaw. No problem. Under constant surveillance, Cooper will have to be unpredictable, facing his fear of popping to crash a party at Hasan’s well-fortified plantation compound. Yes, the laser fences are real. As long as he survives his next pop, Cooper won’t let anything distract him from getting the job done. Not the android security guards, who aren’t as bright as they look, or even Southern Comfort in a purple dress, Geri Harper (an undercover Agent). Nothing Coop can’t handle.