First, another thank you to everyone who has signed up for the Blogoversary Giveaway Bash. 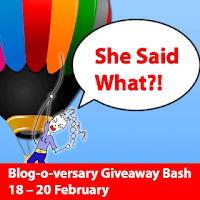 Elise and I are excited and really looking forward to readingyour comic strips, especially after our initial hiccups, my computer hassles and her flu, which I hope are both under control now… fingers crossed… though this new computer tends to be rather slow…

One of the participants, Tammy over at Writing One Petal At A Time, is having a major linkage problem. Please don't forget to visit her place during the bloghop!

I'll be doing my rounds during the course of today and tomorrow (in between figuring out this new set-up) and I'm looking forward to a good laugh!

Now I'd like to welcome you as we Spread The News and Cheer On The Run Away Bride in Shelly Arkon's Blog Party! 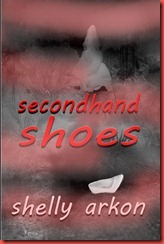 When she was nine, Shelly Arkon's mother advised her not to write a novel because no one would publish it…but she wrote it anyway.

Shelly Arkon has never stopped writing since she wrote that first novel as a child. In spite of more family drama than most of us could handle—as the mother of five daughters, drama is unavoidable–she's been writing most of her life. She says most of these stories, written in longhand in spiral notebooks, have been about vampires.

She now lives in New Port Richey with her husband and two dogs. She’s also a member of Florida Writer’s Association and Writer’s of Mass Distraction.

Currently, she’s working on a book series. It’s’about two grandmothers, one a New Age hippie, and the other, a Southern Baptist, their grandbaby, their grown children who are pill heads, their extended dysfunctional family, and a dangerous drug dealer.

The two grandmothers find themselves in a dangerous pursuit to save their grandbaby while finding an unlikely friendship between them.

Why do you write?

There is a constant chatter going on in my head all day. Ideas and dialogue come quickly where I have to write them down. If I don’t, I may miss an opportunity to get it down the way I heard it the first time. Even characters get perturbed when you don’t relay their information correctly. They want their stories told in the right way. Not to mention, all of my characters bug me until I do-I have a tendency to work on multiple projects at a time.

Can you explain the trials and tribulations of writing your first novel or writing in general?

There’s a ga-zillion of those. My first set of trials and tribulations began in the first grade when teachers stuck me in a slow class because I couldn’t grasp reading and writing like the other kids in my class did.

One afternoon, one of my teachers handed me a stool, an eraser, and a piece of chalk. I was to write, say each letter to my name, and then sound it out and repeat. This tiny feat took up an entire afternoon.

First grade through the third were the most tedious years of my life. But I’m thankful to all my teachers for their patience and persistence. By the fourth grade, I was further ahead than most my classmates in reading and writing along with my big love for both.

Once I took off in reading and writing, I read everything I could get my hands on. And I had an affinity for diaries, spiral notebooks, pens, pencils, and daydreaming. My imagination ran wild with stories and poems. I wrote non-stop as a child and teen.

Unfortunately, there were people and even myself who discouraged me from writing. Many times I heard ‘no one would publish you’ or ‘there’s nothing special about what you write’ or ‘so-n-so writes way better stuff than you do.’ Negative self-voices are the worst. So you have to find your positive self-voice to talk you out of the bad conditioning. This is something I’m always working on.

Not only do people and yourself get in the way of writing, but so does life. Marriages. Children. Divorce. College. Work. Mundane chores. Traumatic life events. These can really put a damper on one’s ability to sit in a chair and write out your characters’ problems when you have your own.

In 1998, I sat down one evening and wrote the first chapter to Secondhand Shoes. My thoughts were I would be able to finish it within a year, but I found myself suddenly a single mother of five. So I tucked it in a folder and stuck it in my closet. For years, I made notes and wrote dialogue for it and tucked it away.

Several years later, and down to two children in the household, I plunked myself back into a chair and wrote. I wrote it four times over. The first version, I hated and couldn’t relate to it at all. It was like reading a Monday night movie on Lifetime for Women. The second version, the protagonist was a real whiner. When I finally finished the third version, I could finally see the forest through the trees, and the fourth version of Secondhand Shoes was born.

Somewhere between the first and second version, in 2008, I became a member of the Florida Writer’s Association. Every second and fourth Monday evening, we meet at the Barnes and Nobles in Carrollwood. There, we edit and critique each other. The girls and one guy in the group are my checks and balances as I am theirs.

Once I got the okay from my group members that it was ready, it was onto the next stage in the writing experience. Finding an editor. Well, I had the gem of all editors. Kaye Coppersmith. She was a longtime member of Florida Writer’s Association and halfway through my manuscript when she passed. That was this past April. At the time, I felt like God and the Universe had stolen her from me. And the negative voices ate at me again.

But I rose above it, wiped my tears, and went forward. It wasn’t easy finding an editor who could keep my writing voice. So many editors out there try to change everything so much so they lose the characteristics of your characters and their voice. I also found a lot of people labeling themselves as editors, only to find out they didn’t know much about the profession.

And how did you publish?

I ended up going Indie (self-published). Yes. I did try the traditional route but after sending the requested manuscript to agents and publishers, most times I didn’t even get a rejection. Not getting a response bothered me more than not receiving one. It would have been nice to at least hear they didn’t think my novel was marketable. To this day, I haven’t heard back from one agent who requested my manuscript ‘as is’ in 2010. Getting published isn’t as easy as one thinks. No one writes a novel and becomes instantly published.

Let me tell you, self-publishing isn’t easy, either. Since I’m not a computer geek by any means, I thought many times I would throw my computer into the street over formatting. My eyes thought they were going to fail me over the many times I proofread. Right now, I’m feeling a bit overwhelmed with the marketing part. Indies are a one man or woman show wearing many hats while maintaining their day jobs.

Also, being self-published takes the cost of making a book out of your pocket. Nothing is free. One has to hire a cover artist, an editor, and someone who can format for an ebook. It all takes time and a lot of dedication.

My novel, Secondhand Shoes is now available on Amazon either in paperback or as an ebook. Paper back is $13.50. Ebook is $4.99. But from February 19th through the 21st the ebook is FREE to everyone.

Also, I’m giving away two $15.00 Amazon cards and two autographed paperback copies of Secondhand Shoes. Since I don’t do rafflecoptors, all I ask is for you to leave the best advice you can give someone on their wedding day and promise to spread the news. On March 1st, I’ll announce the winners on my Secondhand Shoes blog, http://secondhandshoesnovel.blogspot.com/

The shoes didn’t fit. It was an omen.

Eighteen year old psychic-medium-germ-a-phobe Lila should have listened to her ghostly Gram’s advice the morning of her wedding, “Take off that dress and those shoes. And run.”

En route to the honeymoon, she decides to listen after too many disagreements with her groom. It doesn’t pay to go along to make everyone happy.

Still in her wedding dress and shoes, she escapes out a diner’s bathroom window into the Florida woods despite her fear of snakes and germs with her dead Gram’s direction.

So she begins a journey of finding her inner strength, putting her on a deadly run from her psychotic groom and his deranged friends.

Will she ever get past her fear of germs and snakes? Will she survive her honeymoon?

Amazon link for the free ebook: