Today is the day where A to Z participants get the opportunity to reveal their themes for the April challenge! 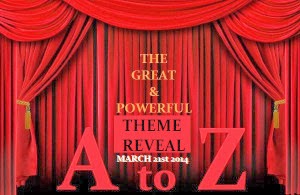 Before I get to the reveal, I'd like to share my A to Z story in A to Z style.

Some of you may remember it – I used it as a promo post for the 2012 challenge.

A to Z Story in A to Z Style

Get ready for the ultimate blogging challenge.

Hype yourself – get into the swing of things.

Jubilation, an upbeat spirit prevails and spreads throughout the blogosphere.

Midway – made it… the halfway point – not that bad after all, is it?

Phew! Pressure's on… big time. Plod along at your own pace. Perseverance needed. Push yourself forward.

Quirky, quaint and for some the "quintessential letter of dread"  – may cause bloggers to quiver and quake.

Revitalisation, rejuvenation, re-energising and recharging of dying batteries may be required at this point – remember you're not alone…

System overload… out of sync… saturation point almost reached… senses spinning as you struggle to sustain the systematic flow.

Thank goodness… can see the end in sight. The turbulent, tumultuous, torturous journey almost over! Almost time to say – toodles.

Unbelievable – the undeniable atmosphere of unity! Lots of bloggers upbeat – also a sense of urgency as the last five letters loom.

Va-va-voom!  Versatility and variation is the name of the game as the bloggers prepare for the end – full of verve and vigour.

What do I say now? Words fail me… sending  well-wishes to all bloggers participating – if you made it this far, three more posts…

X stands for x-ceptional, x-otic, x-factor, x-files, xtreme, x-hale, x-rated, xerox – the letter that most bloggers have a hard time getting to grips with.

You know that I've run out of things to say. Yes, enough yada-yada and blah-blah-blah… you'll understand when you get to the Y-post in April.

Zis is zee end. No more left. Zip… zilch… zero… and there is no way that I'm gonna make 26 words for the Z-post… I tried.

which means that you get to play along!

IF BOOKS COULD SPEAK, WHAT WOULD THEY SAY – FUN WITH CAPTIONS!

Yes, it's 26 days of fun with books, in which 26 different books get to say what's on their minds! The posts are SUPER SHORT (under 10 seconds to read…) And you get to have your say too! Watch this space for more info!

Talking about books, Mary Pax is set to release the 5th book in her Backworlds series! Go Mary!

War is coming. A horde of merciless aliens poise just beyond the Edge. In a matter of weeks they will devour the worlds.

Racing ahead of the apocalypse, Craze returns to the Backworlds to warn them and plan a defense. Only he can’t go home. Banned from Pardeep Station, he must wage a more urgent battle. His moon is under siege, and his friends are dying.

Bad things come in threes, and the galaxy is no exception. An old enemy returns, attacking moons and defenseless globes, leaving a wake of destruction. Worse than that, they threaten to join forces with the alien horde.

Defeat seems inevitable. Craze may not be able to stop it. Yet home is worth the fight.

Fantasy, science fiction, and the weird beckons to M. Pax, and she blames Oregon for that, a source of endless inspiration. She docents at Pine Mountain Observatory in the summers, teaching the public about the stars and the galaxy. A Bachelors of Science in Journalism, she had former lives in marketing and television before settling down to write. Want to know more? mpaxauthor.com

SEE YOU AROUND ON THE A TO Z CIRCUIT!