Before I announce the winners of the She Said What Blogoversary hop, it's time to celebrate with a fellow blogger, none other than our very own Captain Ninja, on the cover reveal of his latest novel Cassastorm! This book marks the last in the already successful Cassa trilogy that has Alex ranked as Amazon Sci-Fi Best Selling author! Woo-hoo! 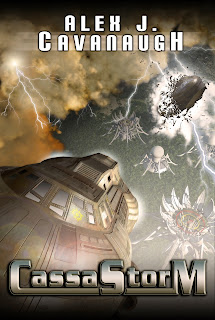 Byron thought he’d put the days of battle behind him. Commanding the Cassan base on Tgren, his only struggles are occasional rogue pirate raids and endless government bureaucracies. As a galaxy-wide war encroaches upon the desert planet, Byron’s ideal life is threatened and he’s caught between the Tgrens and the Cassans.

After enemy ships attack the desert planet, Byron discovers another battle within his own family. The declaration of war between all ten races triggers nightmares in his son, shaking Bassan to the core and threatening to destroy the boy’s mind.

Meanwhile the ancient alien ship is transmitting a code that might signal the end of all life in the galaxy. And the mysterious probe that almost destroyed Tgren twenty years ago could be on its way back. As his world begins to crumble, Byron suspects a connection. The storm is about to break, and Byron is caught in the middle…

CONGRATULATIONS ALEX – THE COVER IS GORGEOUS!

And now onto the bloghop! Elise and I want to thank all the participants for providing such top class entertainment. We laughed non-stop throughout. You people really went over and above… and the outcome exceeded our expectations. When we planned the blogfest, we said even if there was a small group of about 10 people, that would be just fine. But we ended up with 30+ entries and every person did an amazing job. It was so difficult to choose from all the wonderful entries, but at the end of the day, inclusion of the bonus words dictated the final results.

I have to thank Elise for being such an amazing co-host and for the amazing artwork too. I didn't contribute a single pencil stroke, not even a stick leg or speech bubble. My questionable drawing ability doesn't extend beyond a basic one-dimensional face. Period. *light bulb moment* Maybe Elise can design a basic sketching course… I'll be the first to sign up. Whatchathink E?

"I have a leech on my cheek but at least the blood will match my outfit."

"Next time around, remind me to stay away from hot air balloons, mischievous monsters and clumsy superheroes."

"Who does he think he is Buzz Lightyear?"

"I think I gave a frog a heart attack."

"… your skirts gonna flap down, showing the world a set of cheeks it never expected to see."

"There's a party at my cave tonight."

"… does my head look big with seaweed on it?"

"… hoist me up before the champagne and LSD start running out my nose."

"Did somebody say THONG?"

"I'm caught in a balloon tango!"

"We tangoed cheek-to-cheek with death and won."

"Don't get your panties twisted in a bunch."

"Oh honey… that grey thong doesn't look good on you."

"Don't worry Lady Dragon, I'm here to save you from these two thieves!"

"I give you Dragon GPS for Virgin Snack here."

"Great, you dishonourable lout. Now my manuscript is ruined and I don't have a backup."

"Get your ass cheek in here!"

"I'm going to make him an offer he can't refuse."

"Are these breasts or pockets?"

"After all we've been through, you went out and found another critique partner? Why don't I just tie this rope around my neck?!"

"… honour me with a kiss? And not on the cheek either. I mean, I just popped a tic-tac."

"and what's with the banana-yellow cape, dud? Like, vomit."

"I don't know why I travel with you. You're a train wreck waiting to happen!"

"Hurry Elise, we need to get back behind our keyboards where it's safe."

OKAY! Now onto the main part…

LG AT WRITING OFF THE EDGE

MELISSA AT A 5-MINUTE PIECE OF MY MIND

AND FOR HER CREATIVITY THE AWARD GOES TO:

Writing One Petal At A Time

Congratulations Tammy! You have won an awesome banner/badge from Tara Tyler Robinson at Tara Tyler Talks

THE 4 GRAND PRIZE WINNERS ARE

who get to choose one from the following list and we'll be happy to send it to you:

3. The Right To Write – Julie Cameron

MARK MEANS at Left and Write

who get to choose one from the list below and we'll be happy to send it to you:

2. Save The Cat – Blake Snyder

This post also forms part of the weekly celebratory bloghop hosted by Viklit over at Scribblings Of An Aspiring Author.

So how was your week? What have you celebrated the past week? Please share with us!

THANK YOU EVERYBODY AND HAVE AN AWESOME WEEKEND!